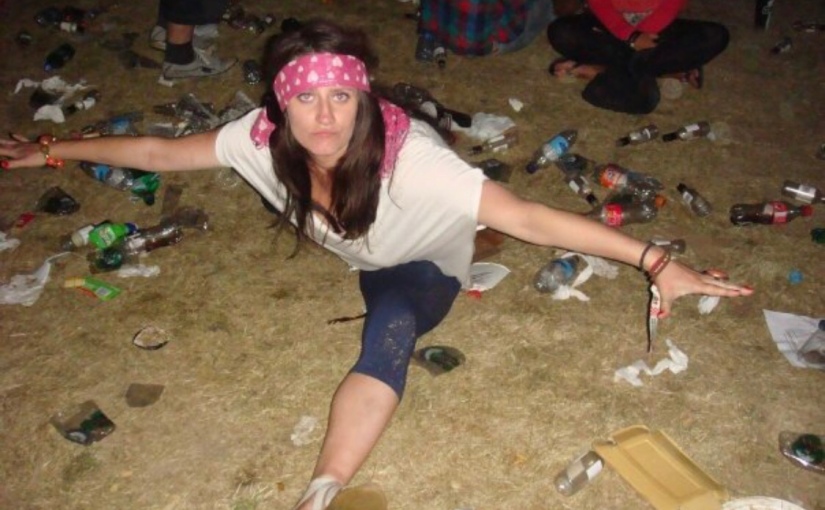 Thought I’d kick 2020 off with a classic tale, from the baby daddy diaries. Be prepared for one of the most romantical stories of all time.

So, years ago. Most prob 8 or 9years now. I was going to V festival with Mac, Pete & other associates 😎 When a few days before, my washing machine decided to break. So obvs the washing is piling up. I need stuff to look all sexy and fine. But no biggy, just so happens that my best friend Mac lives across the road from me. So I go over & wash all my best stuff. And then get myself ready for V fest. I’m about 22/23, young & carefree.

Well the next day, I’m in Macs car about to drive off. When my phone starts ringing, it’s the baby daddy pre fertilisation days. I answer it, all happy go lucky, in a good mood. Ready and raring for the weekend ahead. Then I hear his big fat voice SCREAMING down the phone, how I’m a selfish cunt. Rarararararararararararara, so I’m like ‘are you actually ok in the head mate’, which obvs sets him off again. So when I eventually translate his bitch crying, i find out. That he’s most upset that I only washed some of my own clothes. He was fume dog. Now, if he had of been going V, I would of most prob asked if he needed anything washing. But he wasn’t, it was my time to shine. So I’m sitting listening to him crying, Macs now getting the hump, telling me to put the phone down. So I said the worse thing you can call the baby daddy, this word makes him go full on hulk. I called him a … ‘mug’ 😂 And before he started crying again, I put the phone down. All smug. There really is nothing worse, than someone putting the phone down on you. Especially when you’re full on prepared to tell them about themselves.

Obvs he kept ringing me, going mental. Obvs I kept putting the phone down. It was such a lovely drive to V festival. Then he started texting me, telling me how he was taking all my stuff to the charity shop. Mother fucker what nowwwwww. So I rang my dad, my hero, the best man I know 🥰 Yea right. Listen I love my dad. But I’m no daddy’s girl. If he gets murdered, I wouldn’t say ‘oh my god how did this happen’. I’d say ‘to be honest, it could of been anyone, don’t go too hard on a sentence’. And he knows that, I’ve told him. I won’t be up pretending he was the best person in the world at his funeral. So anyways I ring my dad. And tell him, that Al is threatening to take all my stuff to the charity shop. And his reply ‘well fucking answer the phone & talk to him then, instead of winding him up’. Huh … HUH.

So I did what I do best, just forgot about it. I was on my way now. I wasn’t going back. And I knew he was mad dog & talking pure shit. Giving it billy big balls. We arrive, we’re camping, all is well in the world. Then I get a text to tell me, he’s coming 😱😱😱 So I told everyone we had to hide from him. I was camping near my brothers & told them they couldn’t tell him where we were. Obvs V is big but you literally see everyone you know 100x a day. So we were all on full alert, to hide from the knob.

Eventually, on the Saturday night we made up & see eachother. All was grand.

Sunday comes, and I’m pretty sure we left Sunday night but I could be wrong. En route home, feeling high on life after a brilliant weekend. Get home, baby daddy was home before me. Go upstairs & POW, there’s nothing in my drawers or wardrobe. Nothing. The baby daddy is now shitting himself. I’m in actual shock. I mean there’s nothing left, looks like I’ve been burgled. No shoes. Nothing.

So the shit is now hitting the fan. He’s telling me he’s so sorry & he will go back and get it all.  The shops are obviously closed. And they’ve had all my worldly possessions since Friday! Remember, these were the days before Primark as well. So I wasn’t even cutting about In fast fashion. I was fly as fuck in my Topshop, H&M, Zara garms. And a few Zee&Co tings the baby daddy had gifted me, in the honeymoon stage.

Anyway Monday morning, 9am arrives. He runs down to the charity shop. Barnardos I believe it was. We literally lived above it, in a flat above. Half hour later he comes back up, big black bags. I open them up. And I shit you not, maybe 1 thing he has BOUGHT back was mine! Again, I’m in shock. Staring at these disgusting shit things, that he has had the cheek to think I wear! I’m now screaming at him. Even angrier, that he thinks I’d wear this actual shit. Angrier now, than when he had donated all my stuff. I’d already told him how none of my stuff would even be there! How they go through all the donated shit. And take out all the good stuff for themselves. Like I’m such a fashionista 😎 But I was right. There was fuck all left of mine. I had a beautiful pair of D&G shoes the baby daddy had bought me, from Zap down Queens Rd in Buckhurst Hill. Maybe worn once. I went in to look as well & there was nothing.

It was one of the most romantical times of our relationship. I told my dad that he did donate all my shit. And he told me, I deserved it. Brilliant. And the baby daddy had to give me a £1000 to make me forgive him. Now, I can laugh about it. And we do on the regs. But if someone told me her boyf did that to her. I’d be like THATS GOT RED FLAG WRITTEN ALL OVER IT. Leave him. But look at us now. 3 kids, a house, a dog & we can’t spend more than 25mins max together at any one time. NEVER NOT COUPLE GOALS.