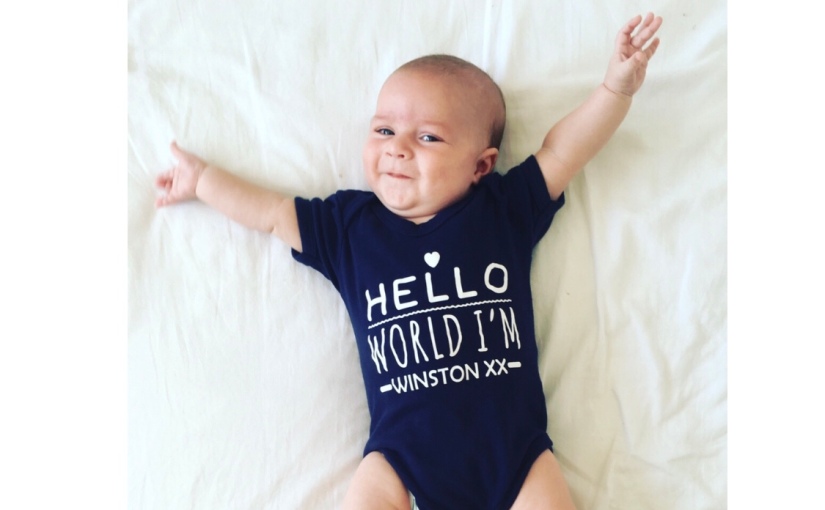 Out of 3 of my offsprings names, Winston gets the most unsure looks, or outright disbelief 😂

When I’ve been asked his name, a few people have actually laughed at then said ‘no seriously what’s his name’ 😎 I wrote a blog about this a while back about Bear’s name ‘a boy called sue’. And I still stand by, not getting outraged every time someone shows or tells me their dislike. I don’t think my children’s names are ‘out there’ but I don’t think they’re names you hear errrryday. I just laugh when someone has something to say, mainly because I can’t stand people that are so easily offended. And I never want to be considered one of those fucktards. But, also because we all judge & have things to say about everything. Whether we do it behind closed doors or not. So it’s roll with the punches kind of thing.

When I was pregnant with Winson, I enjoyed the name & it was the top contender. I also liked Wilbur but the baby daddy hated it. I loved Roux as well but I’m not middle class, or cool enough to pull that off. Plus the baby daddy pretty much spat out his dinner when I even suggested it. Could you actually imagine a man named Allan with a kid called Roux 😱🤣 So I gifted that name to Pete, who was pregnant with Casper. Because we all know the rules, you own any names that you say first!! So you must gift or give your blessing, to anyone you know, before they can have it!! Outside of your circle, is basically a free fall & you have no control. BUT I’m all for copying or using something you like, as long as you’re upfront about it! Know one likes an outright copy cat! Especially one that then pretends, it’s a family fucking name. No mate. Don’t kid a kidder.

One day we were walking the dog with Maximus & Bear over the field. Started speaking to a fellow dog walker, as you do. And she heard me call Maximus, so she commented on how much she liked his name, asked what Bears name was, said she liked that too. Was obvs lying 😊 And then asked me if I had any names for the next baby. And I said, I like Winston. And she basically had a stroke there and then. Whilst telling me ‘oh no I don’t like that, that’s a black persons name’ ohhhh kkkkkkk then.

Then when I had my 8.1 bouncing baby boy, we went for Winston. Baby daddy wasn’t still completely sold. But I’d make him aware this time around, that I gave 0 fucks. I carried him, birthed him, without HIM! And so it was my call. So Winston he was.

Then when the midwife came over the next day, she asked me his name and I told her. And she said ‘oh that’s an unusual name for a Caucasian baby’ 😂

Now, if we’re all honest with each other and don’t pretend to live in the ideal world. I’m sure most people would admit that, they thought the name Winston, reminded them of an old black man. Or a bulldog, or In my case, a cat. My insta BFFs cat is called Winston also. So I totes get people’s surprise when this chubby white baby is before their very eyes.

I like, what I consider strong names for boys. I liked the name and I wasn’t not going to name him it, because people kept telling me they didn’t like it. Or thought it wouldn’t suit him. That’s why, you really are best off not telling people any ideas you have, when up the duff.

I see one of my great uncles over the weekend, who is as Irish as fuck. You can’t really understand what he’s saying, which is a combo of his accent & him being pretty much brown bread. Fuck knows how he’s still going. But he asked his name about 5 times before he believed me. And then started calling him Winnie 😱

And like I’ve said before, every now and then I catch myself saying ‘what the fuck did they call him/her’ and then I have to check myself. Because I have a kid called Bear for fuck sake. And a white baby called Winston. And a Maximus, who I don’t shorten to Max 💁🏻‍♀️ So I should shut my big fat mouth.

But as always Party People. Each to their own! Live and let live! Be happy.

4 thoughts on “Winston, why you so white thooooooough”